Sleeping and twins don't always go well together. Read what sleeping arrangements twin mom blogger Ioana Ungureanu made for her newborn twins and how the plans changed as her babies grew older. 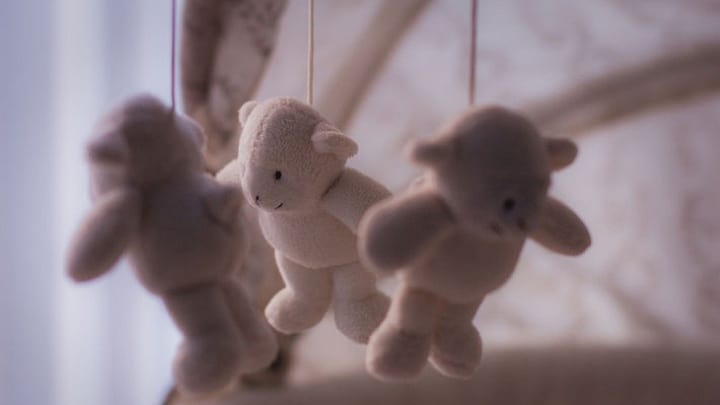 One of the things I spent a lot of time worrying about before the twins were born were definitely the sleeping arrangements. Holding your sleeping baby is the most beautiful thing in the world, but when you have two babies it gets a bit more complicated. We had to find a way to catch some sleep ourselves between their waking times. When we brought them home from the hospital, we put them in the same crib. We had bought two, which made the small room even smaller, but our babies were so tiny they fit perfectly in one crib. Not to mention we thought them sleeping together would make them feel safer. And that worked great. For a very short time…

When they started to wake up many times during the night, and when the colic started, we began to take them in bed with us, to be able to hold and comfort them. They didn’t always wake up at the same time, so our nights were really fragmented. But we made it through. I remember one specific morning. It was very early, the sun was just coming up. S was sleeping peacefully in my arms, and M was near his daddy. I remember thinking how incredible it was that we had pulled that night through. I mean, it had been exhausting, but that wasn’t what I was feeling. I just enjoyed that beautiful sunrise and couldn’t wait to have some coffee. Of course not all mornings were like that. Sleep deprivation did take its toll eventually.

When they got a little bigger, we started to put them in separate cribs. That wasn’t a very successful attempt. Not only did they not like sleeping in the cribs, but also we missed having them close to us. Babies really are an addiction. They may destroy your sleep and turn you into a zombie, but when they do sleep it’s the most peaceful and beautiful thing possible. Not to mention they used to roll over and try to find us in bed, trying to feel us. Then, before they were 1 year old, things got a bit more complicated. My husband’s job forced him to be out of the country for several months in a row, so I was alone with the babies at home. I tried to find the best strategy for sleeping time, especially considering their mobility and energy were pretty big by then. My hope was, again, that they would sleep in their cribs. So we placed our bed in the middle and their cribs on each side. Very feng shui, as you can imagine. I had a brave dream, to place them in their cribs, give them their bottles and wait for them to drink their milk and then go to sleep by themselves. And that worked. Once! It was such a memorable evening!

After that glorious time, the sleeping time hostilities began. After various attempts and the death of many of my brain cells, I finally found a solution. It was far from pretty, but it worked. I used to lay a blanket on the floor in the living room and have sort of a night time picnic. My husband helped a lot, because he had taught S to drink his milk on the sofa and go to sleep by himself. That didn’t work with M, though. So I put him to sleep rocking him on my legs while S was finding his perfect spot on the blanket beside me. That took a while, but in the end they did fall asleep. And then I would gently carry them to their cribs. The really fun part was when they would wake up hungry during the night. I would
place them in the same crib and go prepare their formula while they were furiously crying in the background. When I came back with the bottles, they were like two chubby baby birds waiting to be fed.

Magical moments that won’t come back

That feng shui arrangement began to fail when they realized they can climb the crib and come into bed with me. So the cribs stayed for a while as safety barriers, to make sure they didn’t fall during the night. But at some point they disappeared. Now S and M are 3 years old and still sleep with us. It’s crowded and sometimes uncomfortable, and I know at some point they will have to sleep in their own beds, but I don’t want that moment to come too soon. I read that there are studies that show that it is really good for children to sleep in the same bed as their parents until the age of 3. I think it’s amazing and useful for the parents as well. These are magical moments that won’t come back. They are growing so fast and this intimacy will soon change or fade. So I love this uncomfortable arrangement, because I can hear their breath and feel their sweet smell, and that is my pure happiness.