We are very grateful that Tine agreed to share her cervical cancer story with us – we owe her a debt of gratitude. You can follow Tine and her two lovely twin girls on Instagram – @tinest 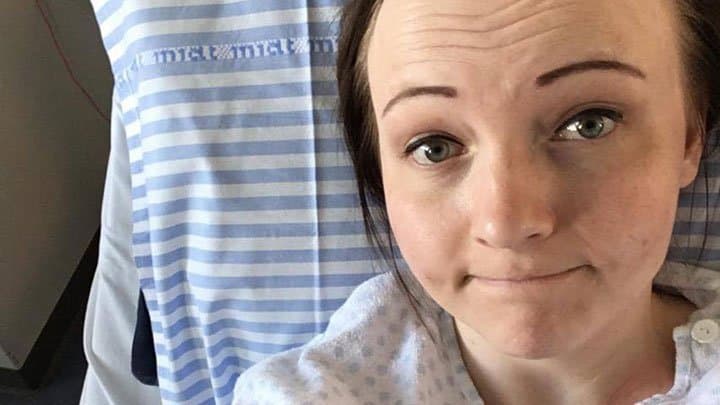 My world changed forever April 5, 2017.
“I regret to to inform you that we’ve found cancer in your biopsy… I’m very sorry,” the doctor said. To me, it still feels unreal. Two months prior, I’d celebrated my 30th birthday. “Am I going to die?” was the primary overriding thought.
It started back when I was around 22 years old. At that time I was very bothered by post-coital bleeding, which is not cool when you’re 22. I was checked by several doctors, but always with the same answer – that everything looked fine. However, one doctor thought I had a polyp, which triggered a referral to a gynecologist. The gynecologist couldn’t find one, but instead found some abnormal changes in the cells of the cervix.

From there, I had cervical screening tests every three months for the following year. The abnormal changes in the cells continued and eventually became moderate, which meant they developed negatively. That was a hard-hitting message to receive, and it made me incredibly sad. At that time I was 24 years old. I decided to accept the free offer to be vaccinated for HPV. It can’t hurt, I thought. The gynecologist wanted to avoid a cone biopsy due to my age and the risk of premature birth if I was to become pregnant. After I had the first vaccine, a cervical screening showed that I no longer had abnormal cellular changes. It was quite a relief, I felt 20 kilos lighter. I still went to regular screenings as recommended by the National Board of Health in Denmark, where I live.

My life went on. I met the man of my dreams, we moved in together, and bought a house. I became pregnant pretty quickly in 2015, when I was 28 years old.
It turned out that we were destined to be parents to identical twins – two girls. First a somewhat frightening message to receive, but at the same time wildly fascinating. A twin pregnancy is a risk pregnancy, so I was monitored very closely. As I reached the 24th week of pregnancy, my cervix was shortening and I was more or less on bed rest from that week. It was a very worrying and tearful time. I was very scared of losing my girls. Every night I went to bed, thankful that another day had passed.

At 32+1 weeks my body couldn’t cope any longer. The doctors discovered too late that I was in labour. My girls, Gry and Clara, were born by semi emergency c-section. We spent one month in the hospital. It was a very different way to become a mother. Giving birth prematurely is traumatic. To see your children lie there with skinny arms and legs is not a desirable way to become a mum. To this day I still get upset thinking about it. Now the girls are two years old and are in very good health. They go to day nursery and are really rambunctious.

An inkling that something was wrong

In October 2015 I got an intrauterine device as birth control. It kept bothering me, and after getting a scan and an examination, it was taken out in September 2016. When taking it out, the gynecologist asked if I went to regular screening tests, which I did. I asked if he had noticed something worrying, since he was asking? He answered that it was important that I had regular screenings done. After he had said that, I noticed that I was spotting quite a lot during exercise. I finally pulled myself together and went to see my doctor in March 2017 to get an additional screening done.

They discovered that I had severe abnormal cellular changes. I got really scared and upset. I even called the doctor again and asked her to assure me that I didn’t have cancer. She told me that severe abnormal changes aren’t cancer, but the precursor to it, and I probably “only” needed a cone biopsy. Next step was the gynecological ambulatory for a biopsy. The gynecologist said he could see a wound on my cervix, but as far as he could tell it didn’t look dangerous. He told me that I needed to prepare myself mentally for a cone biopsy. I was told that I would get an appointment in 2-3 weeks, when the answer of my biopsy was back. The phone rang before a week had passed. I was told that they’d like me to come in the following day to get the result of my biopsy. I knew then, that I had cancer. I cried and cried. Was I going to die? Would Gry and Clara grow up without their mother? Would my life end before it had really begun? Thousands of questions filled my mind.

A ray of light

I was diagnosed in my home town, where they aren’t specialized in cervical cancer. I had to go to another, larger hospital, and had to wait for a week before being examined. Another 12 days went by before I received the result of my scans and examinations. The wait was really hard! I did not know how ill I was. Cervical cancer has good potential for survival if you are in the early stages 1a or 1b. As soon as you move on to the subsequent stages, survival drops drastically. That’s why it’s extremely important that it’s caught early on.
My scans and examinations showed that I had a 2.5 cm tumor, which was considered to be locally located in the cervix, ie stage 1b. That meant that they could offer me an operation.

Radical surgery and no more children

May 2, 2017, was the date of surgery. They did a radical removal of my uterus and lymphs. My cervix, uterus, fallopian tubes, the top of the vagina and lymph tissue were removed. I kept my ovaries, so I won’t go through menopause. Although I didn’t plan on having more children, I’ve been really sad afterwards because I’m deprived of the opportunity to have more children at age 30. The operation went well and they believed they got it all. They were right. 32 lymph nodes were removed and no evidence of spreading. I didn’t have cancer any longer.

I thought the surgery would be easy and that I would be quickly back on my feet, but unfortunately I didn’t react well to the anesthetics. Four days after the surgery I stopped taking medication for nausea and could get up without getting dizzy. After about 10 days I stopped taking pain killers besides morphine, before I went to bed. I had blood thinning medicine due to the removal of lymph nodes, for about 30 days. I had to inject it myself. I crossed a few mental boundaries to be able to do that.
At the time I was diagnosed, a vaccine given to prevent cervical cancer (HPV), was heavily debated in Denmark.*

*Quite a lot of stories in the Danish media featured women and girls who believed that the cellular cancer vaccine had made them sick. This media coverage led to a drastic drop in the number of girls who chose to be vaccinated.

You die from cancer

I followed the debate from the sidelines, and I really understand those parents who choose not to have their girls vaccinated due to the stories that were being told. Before I was diagnosed with cervical cancer, I was in doubt, even though I had abnormal cellular changes. After I’ve had cancer there’s no longer doubt in my mind. As far as I know you don’t die from getting the vaccine, but you can die from cellular cancer. 25 percent of women, who are diagnosed with cervical cancer, die. I sincerely hope that, with my story, I can contribute a little to the debate, and help parents to fully understand what it is like to live with abnormal cellular changes of the cervix, cone biopsy and cancer, before they choose whether or not to get their children vaccinated.

I’m a member of a Facebook group for women with cervical cancer and I’ve read many cervical cancer stories. The late effects of chemo- and radiation therapy are many. If you’re lucky and survive, life continues after having had a cancer diagnosis, but it’s a different life. A life, with physiological impairment, as a minimum. Many women, who’ve been through radiation and chemotherapy, are battling with numbness in limbs, ingrowing of the vagina, chronic pain and damage to the bladder causing the need for a catheter. A catheter increases the risk of bladder infection and bowel damage that can cause permanent stoma, lymphedema – chronic fluid gatherings that are painful – and the list goes on. You’ve battled cancer, but what do you have to face in the time to come?

To be diagnosed with abnormal cellular changes is really hard. Even though you don’t have cancer you think about it a lot. It’s a process with many ups and downs. To be diagnosed with cancer is the hardest thing I’ve ever had to go through. Not knowing, waiting, thinking a million things at once, screenings and surgery was really hard. It’s also really hard for family and friends, who have to come to terms with the risk of losing someone they love.
As a 30 year old woman, mum of two children, girlfriend, wife and woman, I feel that I’ve been through quite a lot already. It’s given me life experience. I’m more attentive and thankful for every day I get. I’m thankful for the people in my life, and I’m thankful that I’m able to write my story.

Life is a gift – please cherish it and live it to the full.